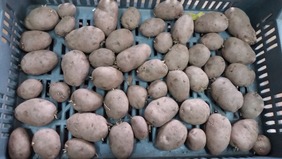 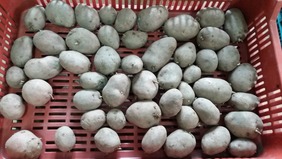 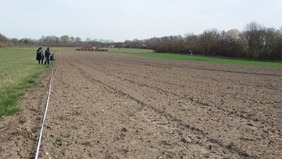 Based on preliminary data from 2019 we can conclude that the pre-crops and microbial inoculants did not have any major effects on potato performance under combined stress. There were some yield differences between the varieties, which could partly be explained by the different vegetation lengths of the varieties, as late-harvest varieties such as Sarpo Mira were harvested together with earlier cultivars such as Charlotte. Moreover, because the phosphorus level of the soil was high at the trial site (415 mg/kg EDTA-P on average), the effect of the phosphorus treatment was not visible.

The inoculant trial will be repeated in 2020 with some changes. Phosphorus treatments will have four replications instead of two, thus increasing statistical power. In addition, new measurements are added to the experiment such as the molecular monitoring of single microbial strains’ presence in the soil after planting.

We have already started pre-spouting potatoes selected for the inoculation trial, hoping that the effect of the added microbial inoculants will have a more significant effect on potatoes in a later, more developed stage. By learning from last year’s experiences, we are hoping to carry out the experiment with more robust data and measurements this year.