The capacity of four bread wheat cultivars to enhance nitrogen and water use is being tested in a controlled field experiment as well as four on-farm trials in Spain. Proximal and remote sensors are used to monitor crop nitrogen and water status to improve resource efficiency and reduce fertilizer application. 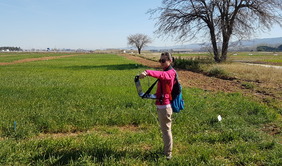 Four bread wheat cultivars, which were selected based on the information from other work being done in the SolACE project, are being tested to determine their capacity to recover nitrogen from a previous legume (pea, Pisum sativum L.) or non-legume (barley, Hordeum vulgare L.) crop.
In the controlled field experiments, the previous crops were ploughed into the soil at the end of May 2019.
The amount of nitrogen in the aboveground residue was

The selected wheat cultivars (Cellule, Apache, Allez-y and Nogal, as a local reference) were sown in November 2019. At the end of January 2020, the plots were subdivided into three sections, each of which will receive a different nitrogen fertilization level:

The recommended rates were calculated based on the expected yield times an extraction coefficient and were revised to take into account the soil mineral nitrogen before fertilizer application and the nitrogen supply from the mineralization of the precedent crop residues (2/3 nitrogen content in the aboveground residue).

As a result, the recommended fertilizer rate for wheat after barley was 100 kg N/ha and after pea was 50 kg N/ha. Half of the experiment will be irrigated (starting on March 12, 2020) and the other half rain-fed. Therefore, the interaction between nitrogen and water levels can be assessed for each cultivar. All treatments and cultivar combinations are replicated four times.

The experiment will be repeated next year. For this, the pre-crops will already be planted this autumn. A similar experiment is being conducted in Switzerland by Agroscope. The measurements that will be taken in each plot are:

Soil water content will also be periodically monitored with a soil moisture sensor down to one meter in each block. To determine water stress in the different cultivars, spike samples will be taken at the end of flowering and soil to determine the carbon-13 and carbon-14 rate. Images with a thermographic camera will be taken in Spring 2020 with the aim of measuring water stress.

Additionally, with the aim of developing decision-support tools, the model CHN is being applied to the legume experiment in collaboration with Arvalis.
Optical measurements of the plots will also be acquired with field spectrometers at the ground level and with a multispectral camera (Tetracam©) mounted on an unmanned aerial vehicle.
To follow the multi-actor approach of the SolACE project, the wheat cultivars are also being tested on farms. A similar process is being applied for these on-farm trials:

Crop sensors will be used to adjust nitrogen fertilizer application following our experience in the research experiment described above.

A field visit accompanied by a vivid discussion with the farmers was done in spring 2019 and will be repeated in 2020 if the COVID-19 restrictions allow. If not, we will do it at harvest. The main concern of the farmers is the lower economic return on the legume crops. The main interest is savings on nitrogen fertilizer, which could contribute to maintaining the overall economic benefit of the crop rotation.