We recently harvested the potatoes from the small plot potato experiments in Hungary. The field experiment tests various potato genotypes, microbial inoculants and crop rotations enriched with soybeans. The aim of the field experiment is to enhance the combined stress resistance of the plants to drought and nutrient deficiency. 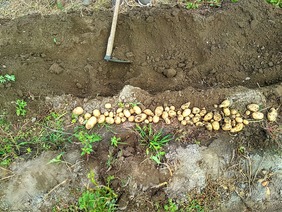 Harvesting of potatoes – the tubers were collected separated by row and genotype. Photo: ÖMKi, 2019. 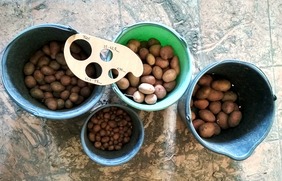 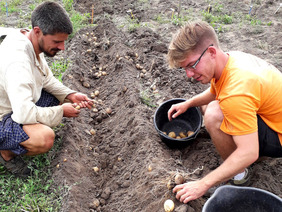 For plants to develop properly, they need the following three main nutrients: nitrogen, phosphorus, and potassium. However, soils are not always able to provide appropriate quantities of these elements for the plants. And the same applies to water. This is why it is important to examine methods that can enhance the resistance and nutrient utilization of potatoes under stressful conditions caused by a lack of nutrients and water.

In early April, within the framework of the SolACE project, we started experimenting with potatoes at Szent István University Organic Farming Sector. In the first part of the experiment, three different inoculants - mixtures of bacteria and fungi - were added. These microbial consortiums can help the plant absorb nutrients faster and more efficiently from the soil. In the second part of the experiment, we used crop rotation, which means that before this year's potato cultivation, the previous crops - rye and soybean – had been cultivated on the same area. In this case, we examine how the nitrogen-fixing ability of leguminous plants (soybean) can affect this year's crop yield.

We harvested almost three tonnes of potatoes from the field  (Fig. 1, 2 and 3), which means we can now record the data and analyse it. In the coming weeks, we will see how the used methods increased the quantity and the quality of potato tuber yield under conditions with sub-optimal water and nutrient inputs.

After the potatoes are collected, the first step is fractioning, which means that the tubers are sorted by size. Usually three fractions – small, medium and large – are differentiated in Hungary in commerce, but in order to get more accurate research results, we came up with five size categories to use in the experiment, weighing each of them.

Once the potatoes are sorted, we record the number of tubers with symptoms of various harmful fungi and bacteria (e.g., potato scab, black and silver scurf, Fusarium, Phytophthora). In the case of scab and scurf, the severity of infection is also estimated. If the mix of beneficial fungi and bacteria included in the inoculants works well, they might be able to mitigate the negative impacts of such infections.

In the last phase of the analysis, we will measure the nitrogen and phosphorus content of the tubers and the soil to see how these nutrients were incorporated by the plants during the season.

We will soon report on the first results of the experiment.