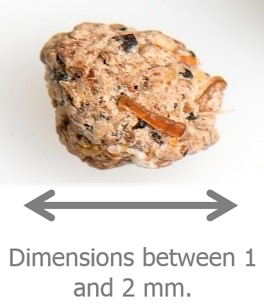 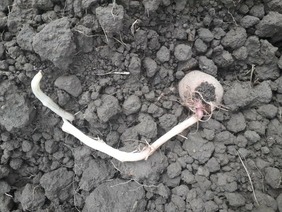 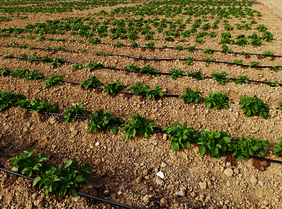 Performance of bio-effectors used as plant inoculants, on crop performance in combination with fertilizers based on organic and inorganic recycled materials. Data based on 963 experimental variants with different crops (tomato, wheat, maize). Graph: BIOFECTOR Final report 2007.

Within the SolACE project, different microbial consortia were selected to be tested in potato and wheat trials under combined drought and nutrient stresses. Using the Minigran® technology, SolACE partner DCM (a plant care company which develops, produces and markets biofertilisers, biostimulants and biopesticides) succeeded in designing a flexible formulation. The different microbial consortia are inoculated onto a small organic granule (between 1 and 2 mm in size), which can be easily adapted to different micro-organisms (Fig. 1).

For potato, three different consortia were selected to be used in field trials. All three consortia consist of a mixture of different gram negative bacteria, arbuscular mycorrhizal fungi and a Trichoderma fungus.

In spring 2019, project partners carried out potato field trials in three different locations: Agroscope in Switzerland, ÖMKi in Hungary and the University of Newcastle in the UK (Fig. 2). In the field trials in Switzerland and Hungary, three different microbial consortia formulated with the Minigran® technology were applied during the planting of potato tubers, and the effect of these microbial formulations on the stress resilience to nitrogen/phosphorus and water shortage was analysed. In the UK, one consortium was tested.

Following these field trials (Fig. 3), Agroscope has shown great interest in testing these Minigran® formulations again in supplementary glasshouse or field trials. While experimental details remain to be determined, Agroscope is interested in looking at the establishment of these different microbial consortia in the root system of potatoes.