The application of the hybrid breeding system for potato has resulted in hybrid varieties that were tested under drought stress. 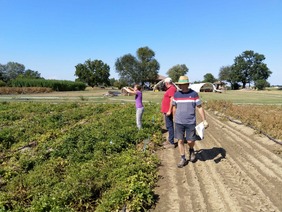 Solynta has developed a new breeding method for potato, deploying the hybrid system by creating parent lines that are crossed to result in hybrids. A set of these hybrids were tested under drought stress conditions at CREA’s facilities in Northern Italy in summer 2019. The eight hybrids were tested under ample irrigation conditions and under water deficit irrigation. Soil water content was monitored during the experiment by Blueleaf. This allowed us to apply a precise water deficit treatment to the crop between tuber initiation and end of flowering. For potato this is the most sensitive period for drought stress as tubers are then formed, and under drought stress, fewer tubers are formed. Hence, in the test we were looking for hybrids that sustained their tuber formation under drought stress.

After harvest, the potato tubers were precisely measured using Solynta’s automated laser phenotyping facilities, whereby each tuber’s 3D dimensions were registered. Based on these results we have selected a hybrid that performed equally under stressed and non-stressed conditions.