A semi-field platform (RadiMax) has been developed to identify possible phenotypic variation in root traits. In particular, it looks at deep root growth potential and activity in fully grown winter wheat crops. As a part of the SolACE project, 14 winter wheat genotypes were sown in the RadiMax platform in 2019. They are being grown under two nitrogen doses. This better understanding of genotype performance is essential to identify genotypes which cope better with water and nutrient deficiencies. 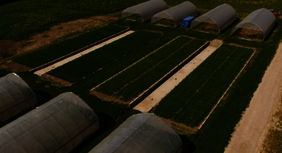 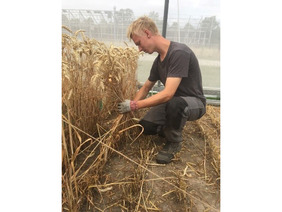 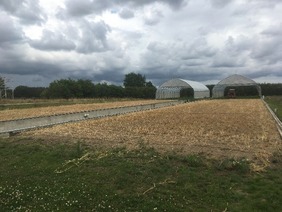 Wheat yield response to water and nutrient deficiency has been investigated over the course of the SolACE project, in several field experiments and in several phenotyping platforms. On these platforms, crops are grown under laboratory conditions with little or no soil (2D rhizotube system or aeroponic systems). As a result, they are restricted to young plants at early stages of growth and root system development. Recently, the SolACE project started using a semi-field platform, called RadiMax, in order to create conditions close to those in field, but with increased precision of the measurements.

The RadiMax semi-field platform at the University of Copenhagen, Denmark consists of 4 plots, each with an approximately 400 m2 (40x9.7 m) surface area (see figure 1). The water stress gradient in the RadiMax relies on a fully controlled sub-surface irrigation system and movable rainout shelters (see figure 1). Plants are grown in rows (usually one row per genotype) along the short side of the plot, right above the minirhizotron tubes (transparent PVC tubes). Due to the V-shaped bottom (see figure 2), a drought gradient is created for each row/genotype from the plot edge towards the middle of the plot.

The RadiMax concept includes a minirhizotron imaging system consisting of 150 minirhizotron tubes per plot and an imaging unit with four multispectral cameras.  These cameras are sent down the minirhizotron tubes and are taking images on their way up. These provide us with a large number of root images, which are used to determine root distribution across the soil profile (up to 3m depth), root length and maximum soil depth with still visible root structures for each cultivar/genotype individually.

So far, several crops (barley, wheat, potato and grass) have been successfully grown on the RadiMax plots. As a part of the SolACE project, 14 winter wheat genotypes were grown on the RadiMax plots in 2019 and will be repeated in 2020. In 2019, root growth was monitored on 3 dates (March, May and June) and data are still under analysis. Wheat shoots were harvested at maturity (Figures 3 and 4).

As a part of the SolACE project, a nitrogen treatment was applied through surface fertilization using mineral fertilizers. Two doses of nitrogen were applied to each cultivar. The high dose was equal to the standard Danish recommendation for nitrogen fertilizer (160 kg N/ ha), while the low dose was set to be 60 kg N/ha. Preliminary results of nitrogen dose only showed a limited effect on root growth, but a significant effect on yield.